As you may have already noticed, Style Bard has to go on temporary hiatus due to a few life changes and some new time constraints. Hopefully we can get going again soon, but in the meantime it's best to wait until quality, thoughtful content can be once again ensured.

~Style Bard
Posted by Style Bard at 1:44 PM No comments: 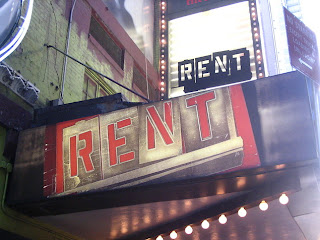 We all know that moving is a hassle. The packing. The planning. The paying-for-it part. But I think that trying to find a new apartment to rent in New York City (hence the photo -- nice, right?) is actually the hardest -- much less when, like me, this also involves locating a new roommate via such glorious devices as Craigslist.

It also involves so much paperwork. Between gathering my employment records and letters of recommendation, as well as all the communications and e-mails between myself and realtors and prospective roommates, plus all of the forms proving my identity and the application itself, I'm up to my elbows in electronic files and actual forms. Just to move! I keep almost chickening out and staying in my apartment (which I really hate after two years) just to avoid the whole hassle, even though I'm already entrenched in it and might as well just push forward by now.

Oh, right. And I guess I should mention that this month is my two-year anniversary in NYC. Happy Anniversary, self! Sometimes I really cannot believe I've been here (in this region much less this exact ghetto apartment) for that long. Other times it feels like I've merely blinked and the time disappeared. For example, when I was checking my credit score it told me that I had an 8-year-old credit history. But that's impossible, I thought. I opened my first credit line in college! ... Oh wait. Oh, god. I'm old.

My big points of pride right now are finagling ways to cut costs, like asking friends to help me move (TBD) and avoiding broker's fees (also slightly up in the air but I don't want to talk about it). I also truly hope that this will work out -- KNOCK ON WOOD -- and I will finally live in Manhattan instead of Brooklyn. But we'll see. If you have any prayers or voodoo vibes or good thoughts to send my way re: moving, I would greatly appreciate them, C/O Style Bard.
Posted by Style Bard at 1:53 AM No comments:

Check out the shoe sales from the past week on Style Bard Shoes:

40% Off Women's Shoes from Reebok - Expired

Send Me Your Fancy Nail Photos! 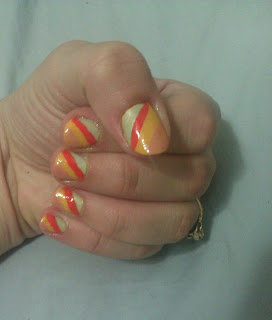 She says: "the yellow is the base, so all the others are kind of a mix (well, the opi havana collection bright orangey one is pretty much the same). the green is actually kind of a shimmery light blue, & the lighter orange is actually pink/nude."

Feel free to send me any photos of cool nail stuff you're doing, since it's apparently our new hot topic!
Posted by Style Bard at 1:47 AM No comments: 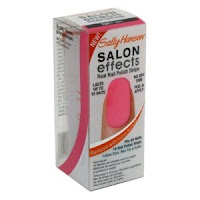 These strips are like a combination of wet nail polish and a very thin sticker. You just rub them on with a little wooden stick and they're supposed to stay in place until you take it off with nail polish remover. Here's what went down:

3) Peel off the clear plastic and the white backing; apply correct size over nail: 4) Bend the ends over and file them off the top of your nails:

All in all, I prefer regular nail polish because I think it takes about as much time to put on from start to finish as does layering paint on the nails and letting them dry (maybe I'll get faster if I do this again soon). These are a little more smooth and consistent per nail, but I felt like getting there required more effort and brainpower than the repetition of painting your nails. We'll have to see how this holds up in terms of chipping and staying on for the final analysis. I think for a solid color, it's not really worth it. However, for one of the crazy patterns they have, you get an awesome effect with comparatively little work. End result (complete with the mess you'll have left over on your desk):

If you're thrifty and careful, each kit really has enough for two "manicures." Enjoy, and be sure to let me know what you think!
Posted by Style Bard at 1:26 PM No comments:

Check out the new shoes on sale at Style Bard Shoes:

Free Gift with Aerosoles Purchase from Shoebuy - Expiring This Week - Expires May 15, 2011

*Deal of the Week* Zappos for Mother's Day - No Expiration
Posted by Style Bard at 11:38 PM No comments:

I got so many compliments on the new shiny pink color I was wearing in my new ring photos! In case you're wondering, the color is "Digital" from Sally Hansen's H-D Hi-Definition line: 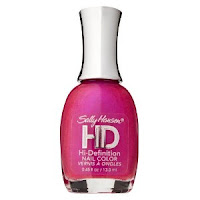 This week, I changed it up and I'm now wearing a boringly named "118A" shade from cheapy brand NYC: 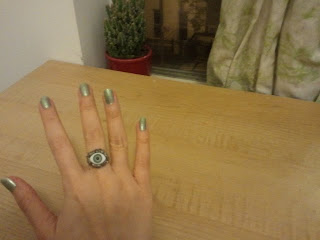 Next up will be a review of the new Sally Hansen Salon Effects press-on nail polish strips, so let's see how that compares to the same brand's pink liquid stuff! Can't wait.
Posted by Style Bard at 1:39 PM No comments:

Style Bard
New York City, NY
The Style Bard is a young female writer with a sense of style and too many opinions. She has a hearty shopping appetite but a limited budget, and she believes that "retail value" is never the final word.

[Graphics on this site that do not belong to the Style Bard are the property of their respective, cited owners.]